Escape to the Adventures of Oaxaca, Mexico

Although it is currently advised we stay home and avoid travel, we can still take ourselves away and dream about where we may go next…

While the majority of North Americans are very familiar with Mexico as a beach vacation hot spot, fewer have ventured away from the coast’s all-inclusive resorts into the interior, where culture and cuisine are bursting at the seams. Oaxaca City, located in the synonymously named state, is a bright and burgeoning travel destination about a 6-hour drive from Mexico City, and is slowly becoming more popular with Western travellers. I escaped to Oaxaca one rainy, cold Vancouver winter with a group of four twenty-something friends, on a mission to taste our way through the traditional dishes of one of Mexico’s most unique and exciting regional cuisines – and upon arrival, was awestruck by all that this lesser-known part of Latin America has to offer.

A beautiful ciudad surrounded by mountains and huddled in a lush valley, Oaxaca’s friendly and effervescent character is centred on food, family, music and dance, and is loaded with tradition owing to its diverse population. The state is divided into seven different regions with numerous ethnic and language groups, resulting in a rich, layered culture unlike any other in the country. Oaxaca’s complexities are illustrated in its majestic churches, sophisticated plazas, colorful markets and must-see ancient pyramids, all of which contribute to the city’s Unesco World Heritage designation. Largely safe by Mexican standards and incredibly affordable with a friendly local attitude, Oaxaca attracts travellers from all over the world who are drawn to the region’s thriving arts scene, history and wildly flavourful food. 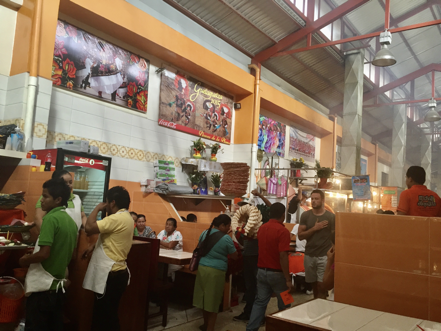 Flavours of the Region

Oaxaca is the birthplace of mezcal, the smoky, brawny “father of tequila” that can be made from thirty different varieties of the native agave plant. You cannot visit the area without tasting the spirit in its purest form, served traditionally straight with a side of orange slices and sal de gusano, or salt ground with the dried, toasted caterpillars that infest agaves. This unusual combination is undoubtedly foreign to Western palates (and is bound to cause some to feel squeamish!), yet somehow makes for the perfect pairing. For the ultimate authentic tasting experience, we visited In Situ, a bar in Oaxaca centro renowned as one of the best and most respected mezcalerías in the city. Boasting an impressive (albeit slightly intimidating) 180-plus varieties of the spirit, we sampled seemingly countless variations from all over the region, produced with diverse distilling techniques and flavours.

Not only known for its mezcal, Oaxaca is revered as “the land of seven moles”, with each of the state’s seven regions divided by their vastly dissimilar interpretations of the intricate sauce. We sampled a fantastic selection of authentic home-cooked moles at the cozy Las Quince Letras, where the chef is known around town both for her expertly prepared traditional renditions of mole as well as her more innovative versions. Negro – the chestnut-coloured, savoury-sweet mole commonly found on North American menus – is crafted in Oaxaca with unparalleled expertise. But this “typical”, chocolatey mole is just the tip of the iceberg. We were amazed to discover the distinct flavours of Rojo(deep red with poblano), Verde (green from tomatillos), Amarillo (yellow, spicy and bitter) and the even more exotic Coloradito (a shade between brown and red, sweetened with plantains). Manchamantel, literally translating to the “table cloth-staining mole”, lived up to its name with its signature bright red chorizo oil – while the dark, piquant Chichilotasted beefy and savoury.

Bold and interesting flavours, much like those that made mole a recognizable household name outside of Mexico, abound in the markets of Oaxaca, with the bustling Mercado 20 de Noviembre serving as the epicentre. Taking up an entire city block alongside the Mercado de Benito Juarez artisan souvenir market, this is the beating heart of the city. Here we found traditional Oaxacan food in its simplest and truest form: squeaky, white and ribbony quesillo cheese wrapped into giant balls hanging from the rooftops; crunchy fried chapulines (crickets) coated in an addictive combination of chili, salt and lime; and an unfathomable variety of chili peppers, each with their own subtle flavours, heat levels and striking shades. In Oaxaca’s markets, culinary adventure lies around every corner for curious travellers.

Eat Smart with Health in Mind

While there are an abundance of great tourist-friendly restaurants in Oaxaca, street vendors dole out some of the most mouthwatering eats in the city and cannot be missed by food lovers – just be prepared to practice a bit of español when placing your order. We were with native Spanish-speakers so did not have any issues, but if this is not the case, having a Lonely Planet guidebook or similar on hand is recommended for access to helpful terms when communicating with locals. English is not widely spoken by the general population, so for those with dietary restrictions and allergies, translation cards are a must. Many tourists shy away from street food due to concerns of falling ill, but our group found that sticking to fully cooked dishes from busy and popular spots, and avoiding pre-cut fruit/vegetables along with drinks containing ice, was a safe bet.

In preparation for my trip to Oaxaca, I ensured I was up-to-date on all of my routine vaccines and booked a consultation at a travel clinic for current information on health risks. During my appointment, I received an oral vaccine, Dukoral, to prevent traveller’s diarrhea, and also picked up emergency traveller’s diarrhea pills in case of severe food poisoning (which was one of my biggest concerns with visiting Mexico). By planning ahead, I was able to avoid any major health issues during my trip, and could enjoy the local cuisine in all of its glory – something I hope to do again soon on a return visit to Oaxaca.

Common Questions and Answers about Vaccines TravelSafe Clinic has Moved!