The Latest about Zika

Zika became a very familiar word to many people during the large outbreak of the virus in Brazil in 2015, when there were an estimated 440,000-1,300,000 people infected. The virus was frequently reported in the media as it spread throughout South America, Central America and the Caribbean and was linked to birth defects in infants born to women who were infected by the virus during pregnancy. We rarely hear about it in the media anymore so many people assume that Zika is now a thing of the past. Although the outbreak has past its peak Zika is still a risk if travelling to many countries internationally. Here’s the latest on where the disease is present and the current recommendations about Zika and pregnancy.

The facts about Zika:

⦁ Zika virus is spread through the bite of an infected mosquito. The virus can also be sexually transmitted

⦁ Zika virus can be passed from a pregnant woman to her fetus and can cause birth defects or miscarriage or still birth.

⦁ Only 1 in 4 people develop symptoms of Zika when infected.

⦁ Symptoms can include rash, fever, weakness, headache, muscle or joint pain and red eyes that usually lasts for up to a week.

⦁ There is no treatment for Zika Virus and there is no vaccine.

Where did Zika come from?

Zika virus was first identified in Uganda in 1947. Before 2007 there were only sporadic cases in Africa and Asia. The first outbreak occurred in 2007 in Micronesia, followed by subsequent outbreaks in Southeast Asia and the Western Pacific. A large outbreak began in Brazil in 2015 which spread throughout South and Central America and the Caribbean. Since 2015 local transmission of Zika has been reported in 70 countries and territories.

Where is Zika still a risk?

Thankfully there are no ongoing outbreaks of Zika. The Centre for Disease Control (CDC) lists countries with Zika transmission. It is important to keep in mind that detection and reporting of cases and outbreaks may be delayed so countries without reported Zika cases but with the Aedes species of mosquitoes known to carry Zika could still potentially be a risk. The yellow areas on the map below indicate these countries. An interactive map can be found at https://wwwnc.cdc.gov/travel/page/zika-information 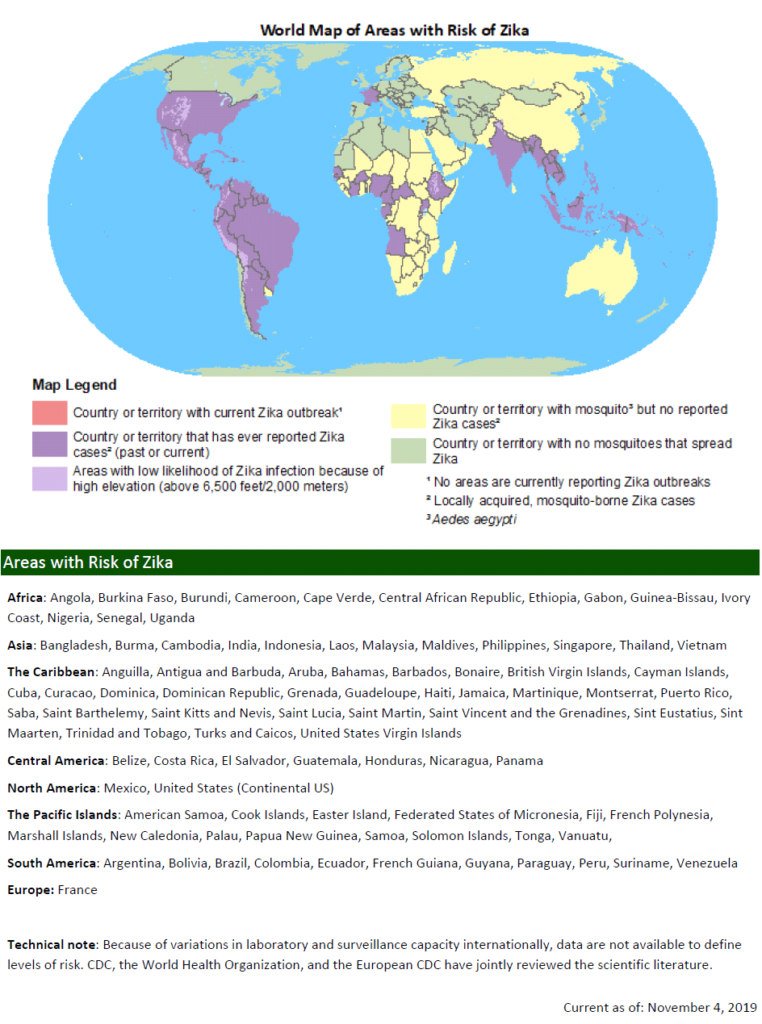 There is no vaccine available to prevent Zika. The best way to avoid Zika is to avoid being bitten by mosquitos and to prevent sexual transmission of the virus.

⦁ Use insect repellent with 20% Icaridin or 30% DEET

⦁ Cover up with clothing when mosquitoes are present

⦁ Avoid conceiving for 3 months (males) 2 months (females) after travelling to a destination where Zika is a risk.

⦁ Female travellers returning from a Zika risk area should wait at least 2 months before trying to conceive.

⦁ Male travellers returning from a Zika virus should wait 3 months before planning to conceive.

Pregnant women should avoid non-essential travel to Zika destinations.  The virus can be passed from a pregnant woman to her fetus.  Avoid unprotected sexual contact for the entire pregnancy with anyone who has travelled to a risk area or ensure to use condoms for the entire pregnancy.  Women concerned about exposure or who think they may have been infected, should see their doctor to discuss testing options.

Travellers departing for Zika destinations can still enjoy their vacation.  Know the facts about Zika and how to avoid contracting this disease.  And remember: keep your insect repellent on hand at all times and use it!