Should You Get the Japanese Encephalitis Vaccine?

Japanese Encephalitis (JE) is the most common vaccine-preventable cause of encephalitis (swelling of the brain) in Asia. With so many travellers exploring Asia one might assume this vaccine is extremely popular, but as it turns out,mostpeoplefrom Canada travel to Asia unprotected.

Below you’ll find information about Japanese encephalitis disease, the JE vaccine and preventative tips to avoid this serious mosquito-borne disease while you are travelling.

What is Japanese encephalitis and where is the risk?

JE is a potentially serious viral infection spread through the bite of an infected mosquito.The mosquitos that carry the virus are mainly found in rural agricultural areas and tend to bite during the hours from dusk to dawn. The virus is maintained in a cycle between mosquitos and animals, usually pigs or wading birds, so it is often a risk around farms, rice fields, or areas of flood irrigation. Although these environments tend to be in rural areas, in many parts of Asia these environments occur near or within urban areas. You do not need to be on a farm to be at risk for JE.

JE occurs throughout most of Asia and parts of the western Pacific. The virus has been found in northern Australia, Bangladesh, Brunei, Burma, Cambodia, China, Guam, India, Indonesia, Japan, Laos, Malaysia, Nepal, North Korea, Pakistan, Papua New Guinea, Philippines, Russia, Saipan, Singapore, South Korea, Sri Lanka, Taiwan, Thailand, Timor-Leste, and Vietnam. In temperate areas of Asia, the highest risk for JE is in the summer and fall. In the tropics the risk can occurthroughout the year, often peaking during monsoon season (including Indonesia, Philippines, southern Thailand, and southern Vietnam). 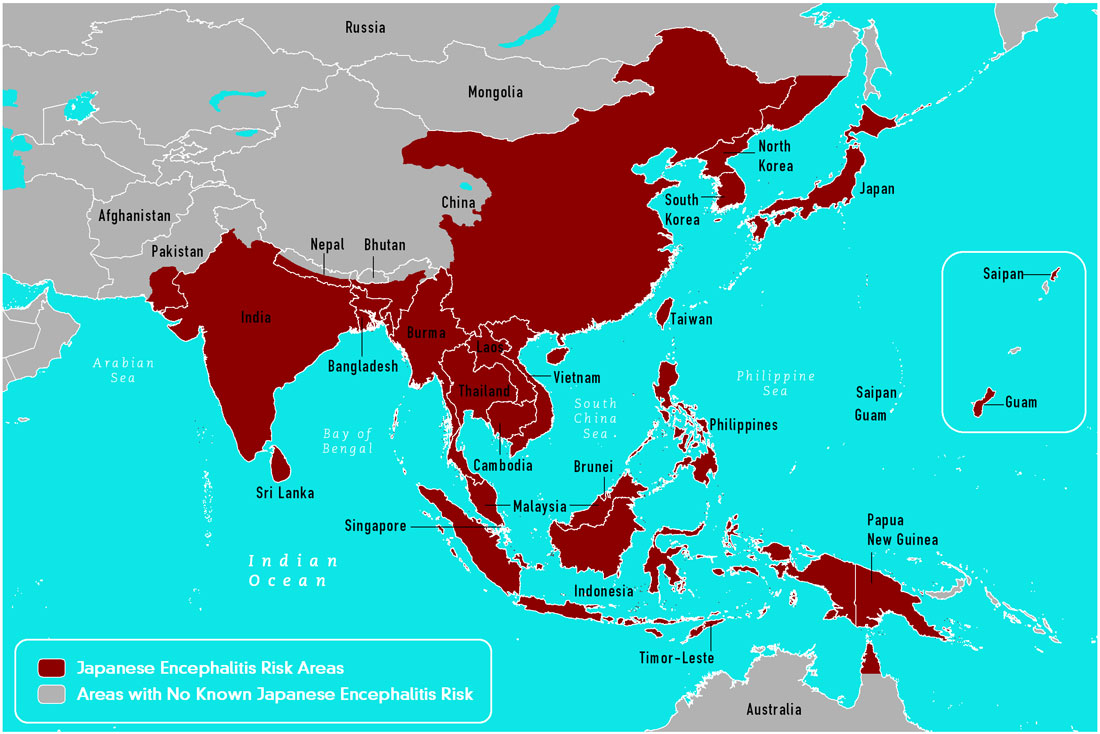 The overall risk of JE is very low for most travellers, but the risk varies depending on destination, types of activities, duration, and season of travel. From 1973 to 2015 only 79 cases of JE in travellers were reported to the CDC. Most cases were in travellers to Thailand and Bali, Indonesia, followed by China and Philippines. Long-term travel to rural areas will increase a traveller’s risk, but even brief travel can increase the risk if there will be extensive outdoor exposure during the evening and nighttime during periods of high JE transmission. In 2017 an Australian traveller died from JE after visiting a resort in Phuket, Thailand for only 10 days.  Although this is a rare case for a such a low risk trip it is important to remember that the risk is not limited to farming areas. There has not been a case in a traveller visiting urban centres only.

Most people infected with JE do not have symptoms. Of those infected, 1% develop symptoms between 5-15 days after being infected which can be as mild as fever, headache and vomiting. More serious symptoms of encephalitis can follow, including mental and neurological changes, movement disorders and seizures, which can result in death or permanent disability. As many as 30% of those people will die, and 30-50% will be left with serious neurologic, cognitive, or psychiatric consequences. There is no specific treatment for JE.

The best way to prevent JE is to avoid being bitten by mosquitoes:

The JE vaccine is available in Canada as a 2-dose series given 28 days apart. An accelerated schedule is also available for adults 18 years of age and older as 2 doses given 7 days apart.  A booster dose after 1-2 years is recommended to ensure long term protection up to 10 years. The vaccine is generally recommended for travellers who:

If you fit any of these criteria, don’t hesitate to book your appointment for a pre-travel consultation. The travel health specialists at TravelSafe Clinic can help to assess the risks for your trip and determine if you should get the JE vaccine.

Third-grade adventures – “My Awesome Trip to Costa Rica!” by Hudson