My School Trip to Senegal, Africa! by Lily Farfan

The grade 11&12 French immersion classes, Perspective Mondiale, from Charles Best Secondary returned from a recent trip to Senegal, Africa. The trip was planned with the intention to better our French skills and explore the Senegalese culture.  We had several day trips arranged for our two week adventure.  Some of the activities included assisting at an orphanage, visiting two schools, a woman’s shelter, and two local villages all within an hour or two from our dorm in M’bour, Senegal.  I will share some of my favourite experiences.

Our journey to Senegal

So the voyage began, with a plane ride from Vancouver to Montreal followed by another one to Belgium, and a final flight to Dakar, Senegal. Everyone was nervous and had no idea what to expect. However, after a 20 hour voyage, everyone was exhausted and would do pretty much anything to get some proper sleep and a substantial meal. All 27 students walked out of the main airport doors into the 38 degree heat and followed a man to an old white bus which was parked in the middle of the lot. Suddenly, everyone was a lot more excited about the trip. Everyone was lugging around two suitcases; one for our personal things and one extra one filled with donations that we had collected from Canada.  We were asked to bring donation items such as children’s toys, french story books, toiletries, shoes and summer clothing.

Once we reached the bus, we were greeted with 5 other men that loaded our bags onto the roof of the bus. Yes, it was sketchy seeing roughly 65 suitcases piled on top of a bus… But somehow they managed to secure them with some bungee cords. We met our bus driver, N’Dongo, who was assigned to drive us around for our whole trip, we hopped up and squeezed into the little bus.

We arrived at the dorms an hour later, and were instantly welcomed by a group of children and hosts. They helped us unload our bags and showed us to our rooms which we shared with one other student on the trip. The rooms were a comfortable size and contained two beds with bug nets, a bathroom and a large window. We were pleasantly surprised when we saw that there was air conditioning in our room and we instantly turned it on full blast to recreate the temperature we were used to back in “Raincouver”. Shortly, it was time to eat dinner and hit the hay since we had an early start the next morning.

Our home away from home 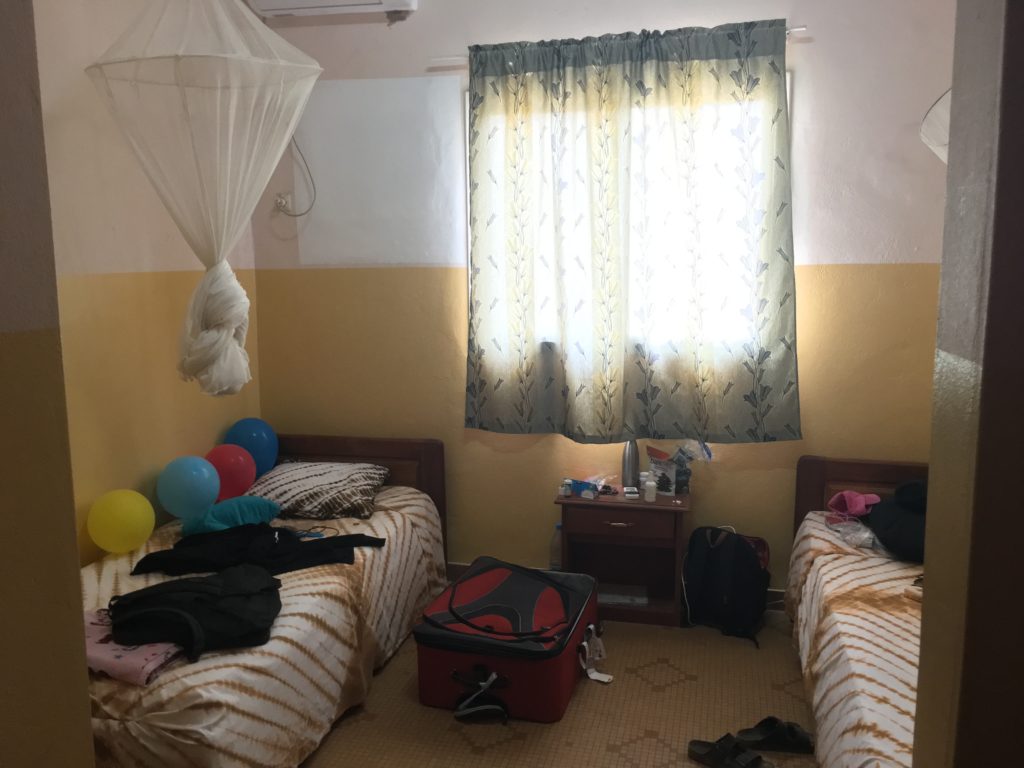 Our first full day in Senegal consisted of Nutella on a white baguette for breakfast, a forty minute bus ride to the women’s shelter in M’bour and a beautiful sunny day spent with some incredible people.

Once again, were greeted at the gate by smiling faces, but this time there was music and dancing. The women formed a circle around our group while a couple of them played the drums and started to dance. I guess you could say it was a little awkward at first, but then we started to get into it and a few of us started to dance. The rest of the day included a lesson on how to make traditional African tie dye, which they later helped us perform on some white t-shirts we brought from home and then we were lucky enough to feast on a delicious homemade traditional African meal called Thié Boudiene. Some of the women braided the students hair, we danced some more, talked, played some games and we said goodbye. 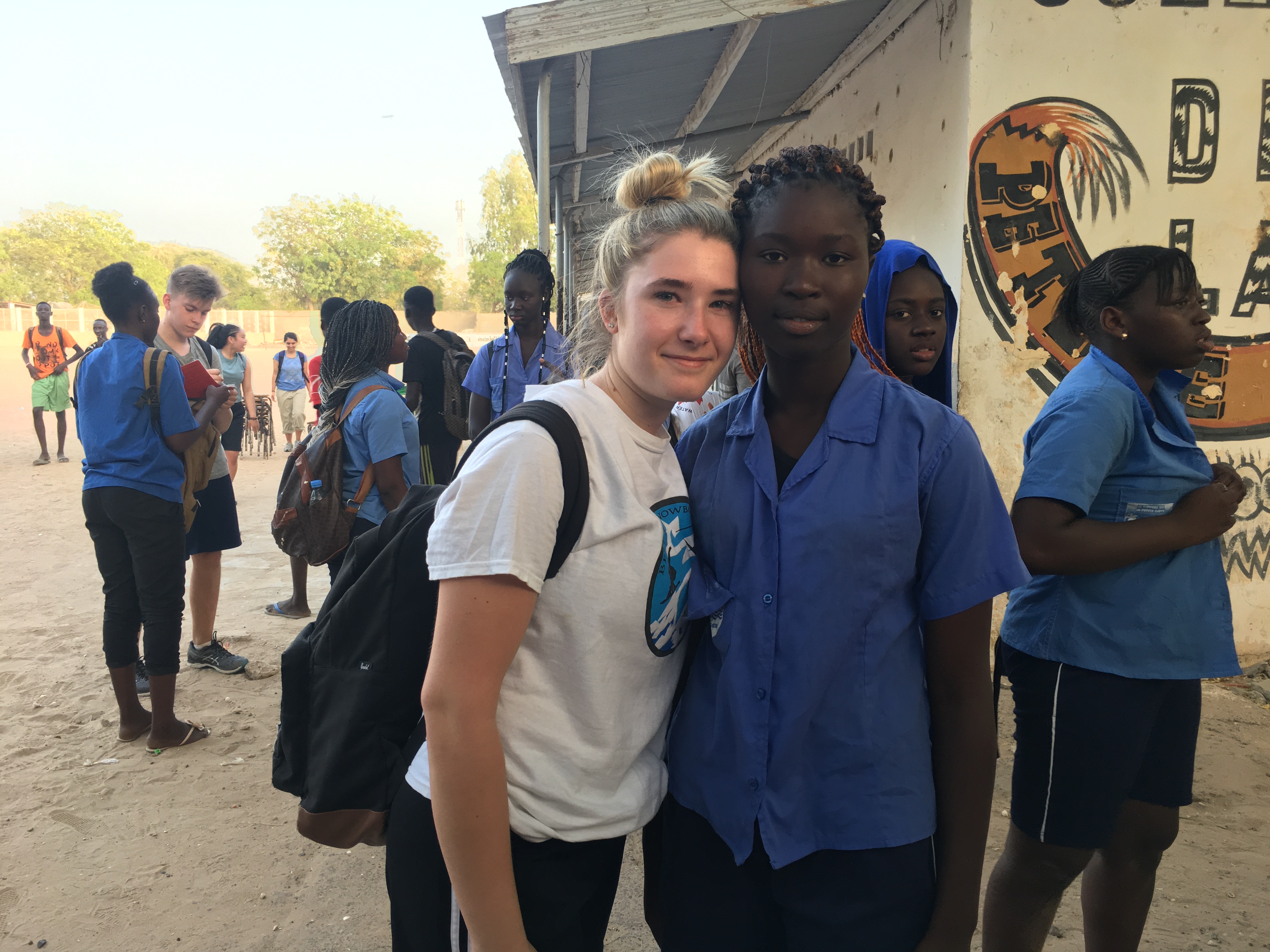 One of my favourite days was when we visited a secondary school and got to meet students our own age. It was easy to relate to them and have conversations, but obviously we had to respect that their lifestyles were very different from our own. Each of us were assigned partners to show us around their school and local village. The partner I was assigned was a girl who was just a few months younger than me so it was really cool that we could easily relate to each other. She started by giving me a tour of her classrooms and court yard, which was a huge culture shock. They had a sand soccer field, an outdoor basketball court and about 10 classrooms for 500 kids. 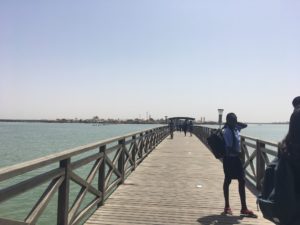 After exploring the school, our partners took us on a ten minute walk to a local island named “Isle de Coquillage”, which translates into “The island of Shells”. To get to the island, you must first cross a long bridge which takes about ten minutes to walk over. The bridge overlooks the beautiful calm Atlantic ocean and is shared by men transporting merchandise by horse and many local villagers walking to and from their homes on the island. 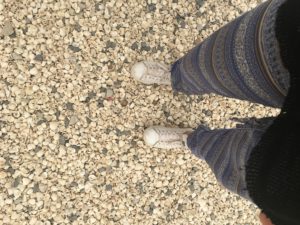 Once we reached the island, you could see that it was covered in miniature white cockle shells and scattered with wild cats, dogs, and pigs. We walked through the narrow corridors between the houses, checked out some souvenir stands and we ended up visiting my partner’s home. I met her parents, her little brother and her grandfather. I was amazed as to how welcoming they were to just let a random stranger into their home and sit on their couch!

After visiting with her awesome family, we returned to the school where they had a goodbye spectacle.  This is a performance by a local band that played drums while the kids danced. Our partners ended up persuading us to dance in front of everyone, but I’m glad they did because it was really fun and it got us out of our comfort zone!

We then played a quick game of soccer back at the school, which of course we lost because none of us were used to playing sand soccer, but is was still a lot of fun. It was sad saying goodbye to our new friends at the end of the day, but I am glad I managed to get my partner’s Instagram so we can keep in contact!

We created a poster and presented it to the students to show we live in Vancouver. (above)

A new friend I made at the elementary school.  We brought French story books and read with them in their classroom.

While travelling back to our dorm after one of our day trips, the tire popped on our bus.  We pulled over to fix the tire and a group of children ran over to meet us.  We played with the children while the tire was being repaired (above).

I met this little boy on a day trip to Île de Gorée.  He ran over to a group of us and made himself comfortable on my lap.  At the end of the day he didn’t want us to leave (above).

On one of our final days we went on a safari to Réserve de Bandia.  We had the honour of seeing giraffes, zebras, monkeys, rhinoceroses and gazelles.

My two weeks were jam-packed with eye-opening experiences and incredible opportunities. It was an amazing trip where so many new friendships and memories were made. Where fun was balanced with culture, breathtaking views, and sad yet unchangeable situations. From zip lining between the baobab trees, exploring Islands and helping out at orphanages, I would not have changed a single thing about my trip because it was awesome! I hope I can go back one day and relive the same experiences, or even travel to another African country. I hope you enjoyed reading about my time in Senegal, thank you and never stop exploring!

Some Etiquette Tips for Your Next Mexican Vacation HPV – What is it and who needs the vaccine?