Lyme Disease on the Rise

Lyme disease became a familiar term in Canadian households when pop star Avril Lavigne was diagnosed with the disease in 2014. As reported by CTV news Lavigne said, “she would wake up with night sweats and felt so exhausted she couldn’t get out of bed.” Canadian country singer Shania Twain, who contracted Lyme disease in 2003, said it affected her vocal cords and left her unable to sing for atime. Lyme disease has been frequently featured in news stories across Canada, as cases of the disease have been on the rise over the last several years.

The trouble with ticks

Ticks become infected with Lyme disease when they feed on infected animals such as rodents and birds. The infected ticks can then spread the disease to humans when the tick attaches itself to a person to feed on their blood. Most people are infected by immature ticks about the size of a poppy seed. Adult ticks are about the size of a sesame seed and can also spread Lyme disease. As ticks are very small their bites are often painless, so it is possible to be bitten by a tick and not know it. Luckily most tick bites don’t result in disease.

Blacklegged ticks are usually found in tall grass and wooded or forested areas. Ticks can be found year-round but are most likely to bite in the spring and summer months. People at risk of tick bites include those participating in outdoor activities in wooded or semi-wooded areas, such as camping, hiking, hunting, fishing, gardening, golfing, or dog walking. Dogs may increase human risk by bringing ticks indoors.

On the rise in Canada

The Public Health Agency of Canada reports an increase in cases of Lyme disease in Canada, from 144 cases in 2009 to 2636 cases in 2019. The BCCDC reports that these rates have been increasing with climate change. While cases of Lyme disease have been on the rise in eastern Canada, the risk has remained low in BC. Fortunately, in BC less than 1% of tested ticks carry the bacteria that causes Lyme disease. The risk is highest in eastern and central Canada. In 2016, 88% of reported cases were from Ontario, Quebec, and Nova Scotia.

The risk for travellers

Lyme disease is also a risk outside of Canada. In the United States the risk is highest in the northeastern and north-central part of the country. It is also a risk in Europe, with the highest number of cases occurring in central and eastern European countries, butthere is also risk from southern Scandinavia into the northern Mediterranean countries of Spain, Italy and Greece. Infected ticks are also present in Asia, from western Russia through Mongolia and northeastern China and Japan, but human infection in these areas is usually uncommon.

Lyme disease is often associated with the classic “bulls-eye” rash, known as erythema migrans, which occurs in >80% of cases. This is usually the first symptom of Lyme disease and begins 3-30 days after exposure as a red rash at the site of the tick bite and slowly expands over several days up to 30cm in diameter. The rash is often accompanied by fever, headache, muscle and joint aches, and swollen lymph nodes. 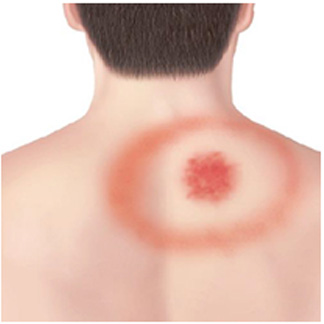 There is no vaccine available to prevent Lyme disease. The best way to prevent it is to avoid being bitten by ticks:

There’s a tick on your body! – now what?

If you find a tick on your body remove it right away. The most important thing is to remove the entire tick, including any parts of the head that might be buried under your skin. Use a tick removal device or a pair of fine-tipped tweezers:

If the tick has been on your body for several hours or days, it may have buried itself deep into your skin. It can be very difficult to remove the entire tick without leaving some mouth parts, which can cause infection. When a tick is buried very deep under the skin it is best to see a doctor to remove it.

What NOT to do when removing a tick!

There are several remedies and folklores about how to remove a tick from your body. Here’s what to avoid:

If you’ve been bitten by a tick and would like to have it tested, it can be submitted to a BCCDC Public Health Laboratory. For further details visit the BCCDC website:

Rabies – Are You at Risk? Resources for Travellers

How to Find Your Vaccine Records

The Facts about Malaria Prevention