Facts about Ethiopia from an Experienced Traveller

We see travellers while they are planning and preparing of their trip but we don’t always hear the stories and see the photos.  Nina Watts recently returned from a trip exploring Ethiopia and has sent some stunning photos and interesting facts about her journey.  We’re posting them for you to enjoy as we think you’ll find them interesting.

Ethiopia is about the size of British Columbia with a population of one million. And growing.

Considering that 85% of the population is rural with no form of power, Its not hard to imagine what activity takes place when darkness falls.

Addis Ababa, the capital, means ‘White Flower’ and is at 2400 metres: the fourth highest capital in the world.

They run on a Julian/Solar calendar. It is 2008 there at the moment and they have 13 months and are 6 hours behind us so it is important to check on which calendar is being used when making a date with an Ethiopian…

The country has never been colonized except for 5 years by the Italians. They speak proudly of their lineage dating back to Solomon and the Queen of Sheba.

The Ark of the Covenant is supposedly behind a curtain in a church in Axum. But the only person who knows if it is authentic is the priest who guards it. And no one in Ethiopia is going to dare challenge a priest guarding the equivalent of the Crown Jewels.

The main language, Amharic, has 33 letters and each letter has 7 variations. And verb declensions are in the middle of the word. Just to keep things simple. ‘Ameceginalow’ is ‘Thank you’. Try saying that in a hurry.

Life expectancy is around 60.

In contrast to the 4500+ metre mountains of the Simiens, Ethiopia has the Danakil Depression: home to the lowest point on earth at 116 metres below sea level. We were there on a ‘cool’ day at 42 degrees C, with salt as far as you could see. Walking on a dried up sea bed essentially. 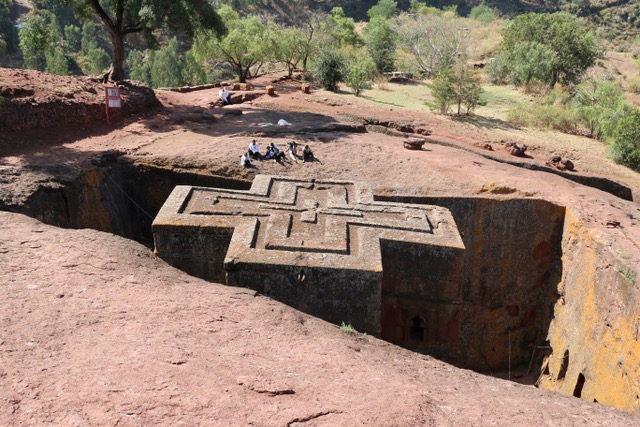 Ethiopia has hundreds of churches that have been dug out of the ground or carved into caves. The exact number is unknown as they are still being discovered. The most famous ones are around a town called Lalibela (Honey Eater), named after a king of the same name. 1162-1221. The king received divine instruction to carve a ‘New Jerusalem’. He was supposedly responsible for building 11 churches within 23 years, the most famous of which is Saint George ( see right).

Tracing the outline of the roof in the volcanic basalt and then chipping away with adzes and chisels seems a strange method of construction. Down 15 metres and more. The concept is completely beyond my comprehension or imagination. Apparently Lalibela’s wife Maskel built a church overnight with the help of 20,000 angels. That’s more my style.

In the west we are used to looking up at large churches: seeing them from a distance and being impressed and then once inside again looking up at the details and workmanship. So it was quite strange looking down on the roofs first: the part of a church rarely observed elsewhere.

Then there was the church in the cave and the pile of not quite desiccated bodies stacked at the back. There were lots of smells in these places as you can imagine, mould and damp and priests who had little contact with water. But I had not expected to add decaying humans to the mix. 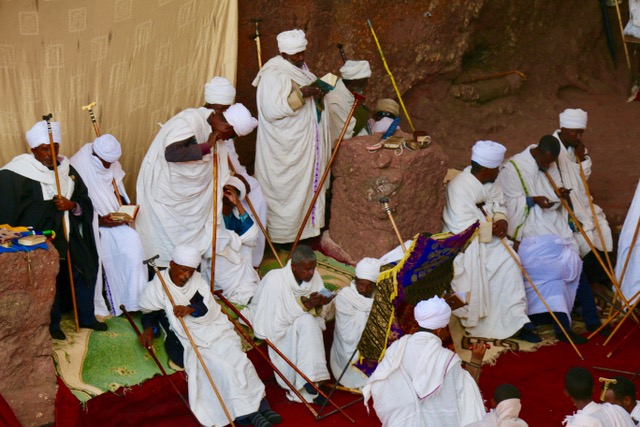 There were white clad monks milling around everywhere. Standing alone, sitting down, lounging, chatting in groups and then, with a seemingly invisible sign (to me anyway) they would start singing and moaning together for a while and then just as suddenly stop and go back to their lollygagging. It was all very organic and somehow appropriate.

Air conditioning in cars has rarely been of much interest to me but I don’t know how I would have survived without it there. I think my fellow travellers were also relieved as extreme heat does little to improve my mood. It can be 65 degrees in the summer. The most intense region of the world. There is an area where  volcanic activity is still happening and sulfur and various other elements create cartoon colours of green and yellow. I have not doctored the image below. There were men cutting salt into unified blocks and tying them onto the sides of patient camels.

And then walking for seven days to sell this important commodity for a pittance. I felt as though I had slipped back several centuries. But there is a new road now so soon this ancient method of transportation will end and salt laden Chinese trucks will be trundling along the roads instead of the majestic camel trains, and the much needed extra income for the salt cutters/farmers will be even less. Progress? 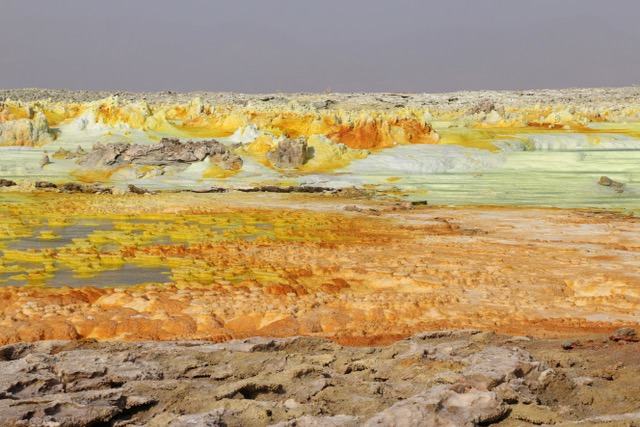 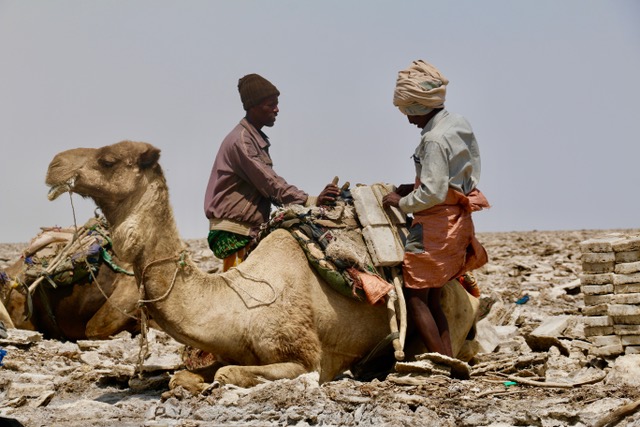 Pertussis (Whooping Cough) vaccine – Who should receive the Tdap vaccine? Packing Made Simple – The Essentials